There are a lot of myths that have been forced down your throats and over time you have digested them to an extent that it has now become hard for you to sneeze them in the air around you. A pot-bellied white beard Santa Claus will one day come along with ringing bells and a bag full of chocolates to grant you all your heartfelt wishes. That’s Santa’s reindeer’s stinky watery shit. A beautiful fairy resembling woman will one night come from the skies for kissing your limply lying sword to make it rise and shine and unconditionally share her bodily fluids with yours. That’s my smelly ass that hasn’t been washed since last week. A pet puppy with deep blue eyes will someday rescue you from your loneliness and compensate for your utterly bored out and borderline death like life. That’s my mucus laden yellowish semen carrying sperm corpses. All of these are some of the myths that specifically cater to kids who haven’t had the simplest of an understanding of what common sense actually is. When these kids begin growing the first strand of pubic hair, it is when they realise that nothing they believe is gonna get real during their lifetime on our globally warming and soon to be turning into dust planet. Somehow at that time, the heavens spill out pumpkin seed sized wisdom to turn these immature fucktards into maturity struck adults and at last, these ex-believers of mythical stories collapse on their bed and go to sleep after consensually aborting their childhood dreams and hormone-driven teenage fantasies.

A very renowned myth prevails in the filthy heads of our ignorant social media addict artists. The myth pertains to creativity and these artists believe that their creativity gets stuck and blocked and stagnated after every few weeks or months or years. It doesn’t. If a writer can’t write it is because she hasn’t written in a while and she’s lost touch with her pen and paper and writing muscles. Same common sense argument applies to other fields too. If a painter can’t paint it is because he hasn’t painted in a while and he’s lost touch with his paintbrush and colours and palette and painting muscles. These muscles that I am talking about exist metaphorically in your brain and are self opinionatedly known as the creative muscles. If you can work out in the gym to pump a huge volume of blood to your booty and calves, then you surely can keep your creative muscles engaged by doing something that actively involves them.

From last three weeks, I was feeling too tired to sit and write and type and edit and then post something. So after getting too much pissed off, I simply rubbed myself off to sleep one night. Next morning, I woke up and created this not so magnificent piece of ultimate art. This table stand is used to hold objects inside it. In its lifetime of existence, it shall never manage to reach a museum to witness the awestruck and amazed eyes of fancy ass human beings who seek soulfulness outside of their soul. Despite the saddening fact narrated in the last line, I felt contented.

Making this small object of narcissistic and artistic appreciation helped my creative muscles work in a pattern which was on the verge of dying a painful death. It doesn’t matter if some goddamn rare species of a wasteful fish die in some polluted sea. Or some white skinned one-horned rhino goes extinct due to human negligence. Or some lovely cat can’t conceive due to permanent ovary damage. I don’t care about such things. But I do care about my endangered sense of artistic creation and to save myself from tombstoning my own creative self, I again did something. It turned out like this. 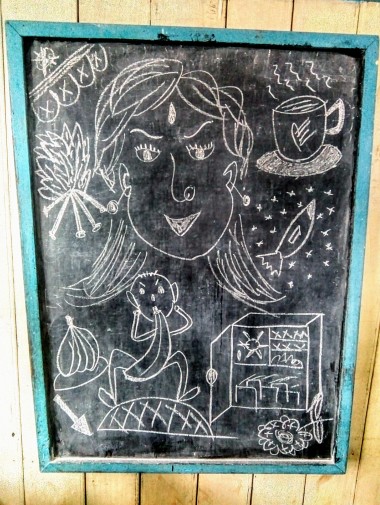 I don’t have to be HB pencil shuffling Picasso to draw. Or a muddy handed Michaelangelo to make something from my bare hands. Or a poverty smitten twice daily masturbating loser to write poetry. I love to keep my creative muscles in shape and the gym where I exercise the glutes of my art and the pectorals of my craft is near me. The waste lying stuff that waits for it to be dumped face down in a dustbin and the ample amount of time that I have at my expense to purposefully kill, using these two barbell plates I keep my creative muscles engaged in a soul-expanding military press. I don’t have to write just so that I can write. Doing any sort of work that makes my brain sweat is good enough to boost my creativity. By doing so my creative energies find an orifice to splurge out from.

What gets stuck is hard structured poop that can’t find its exit pathway between your large intestine and rectum. What gets blocked is your Facebook profile when you stupidly poke people and send them Candy Crush requests. What gets stagnated is the pipeline of your kitchen sink when your throw vegetable waste in it with the expectation of watching it get melt. Creativity is a thing that can’t get stuck or blocked or stagnated. It is designed and destined to translate from one area into another and then into another until the artist finally creates what she wants.

After writing this, I seriously hope to listen to a less number of people bitch about their creativity getting lost and blah blah blah.

One thought on “Un-Constipating Your Clogged Head”