Doodling is amazing. It is a great way to make productive use of time in boring classes and crappy leactures. When people procrastinate and get bored, they doodle. It gives an immense feeling of release that is more or less comparable to masturbatory orgasm. When I saw the Facebook event named Doodle Discourses, I was intrigued. Do people really get together to make silly art? Yes they do. And this time my curiosity landed me into a doodling event. Nothing seemed more extraordinary and fun to do on a Saturday afternoon than this next level shit that was being organised. I just hoped to see people turning up for it.

I reached the specified Cafe Coffee Day in Regal Building after coordinating with the organiser. Connaught Place has so many CCDs and in Regal Building itself there were two of those. Confusion breeds in choice. Along with me were two girls and one out of those was a semi-pro artist and painter. One more girl joined us in the cafe and then came Chitra. Chitra – the lady with a lot of fundas. She was the host to our doodling event. Along with her came two more people. Aunt and niece duo. Being the only guy among 7 of us doodling folks, I sensed this doodling arena to be a pretty good mating market for a heterosexual guy with no looks or money or fame who blogs on wordpress. Anyways, the event started off with an introductory doodling session on a small piece of paper. We had to introduce ourselves through artistic medium. I made this:-

Though my art is not great, in my head I am no less than Vinci and Michelangelo. Every great person started off with poor skills so there is scope for me to be awesome in future. Chitra had brought along a lot of sheets and sketch pens and markers. The material for creation was sufficient and the only thing we had to focus on was being creative and artistic. Then we progressed and began learning some techniques on doodling and sharing our journey as a doodler. Doodling is made up of two words – draw and noodle. One girl had brought along her Doodling Diary which had really fascinating art work in it. And equally fascinating was her name. Poshali. Parents focus very deep on making their child unique and the starting step into uniqueness begins with a unique name. Well done Poshali’s parents, well done.

While we were busy making art, these guys in CCD kept on showing their faces with artificially plastered smiles and poked us to order something. After being called out a few times, we finally decided we should order something. I ordered a Rasogulla Sundae. When the bill guy asked what to put in my sundae and gave two lucrative choices, I told him to add nothing and bring whatever was originally prepared. These people later charge money for the additional stuff and economically harass poor young guys. This is what is referred to as the CCD scam.

Then we played this marvellously interesting game called Pictionary. We took a small piece of paper and on it we wrote a word. The chits were then folded. One by one everybody had to pick a chit and making use of doodling they had to reveal the word while the rest of us made guesses looking at their drawings. It was Dumb Charades using art and was really enjoyable. We had two rounds of this game. Maybe we had three rounds. I have no idea since I was meditatively absorbed in playing and not counting the rounds of our game. When people get together and indulge in activities that allow them to participate and express themselves in a childish manner, it cultivates a lot of joy! 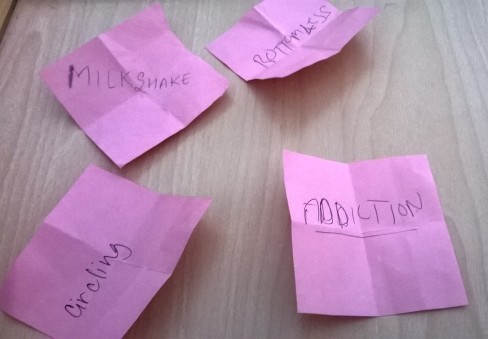 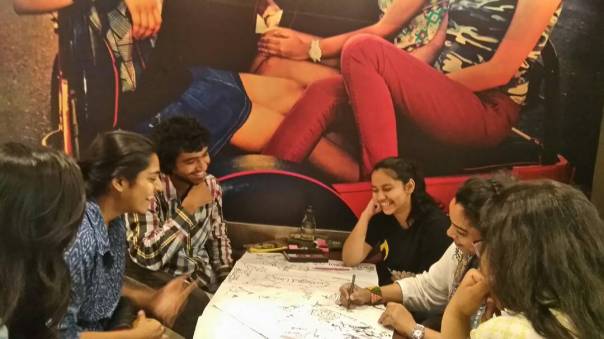 We learned how to make different things such as shadow people and objects from different angles and animals from shapes. After some more discussion about our work lives and other interests, we left. And with a promise to meet soon and create more art together, we said bye bye and took away great memories from Doodle Discourses. Those three hours released a lot of happy hormones in my head and I shall sustain on them for the next few days. After the hormones are gone, something else shall be pursued and this never ending conquest for happiness shall go on and on. And on and on.